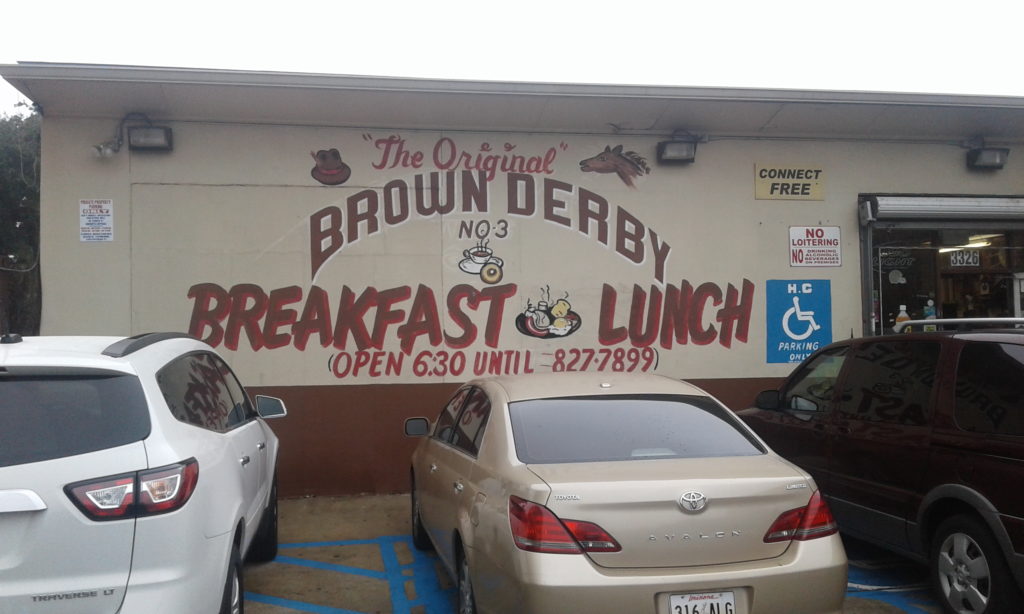 I’m almost never on Tulane Avenue. I live downtown and work in the quarter, so I only really am there if I’m going to jail, court, or the hospital. Luckily I went to Crescent Care to apply for Medicaid and stopped into Brown Derby #3 for a quick beer first. When I went inside I noticed a long line of people with hot plates and made a mental note to check it out later. I’m really glad I did. Like so many other corner stores in New Orleans, Brown Derby #3 claims to have the best soul food in town. I don’t know if its the best but it definitely is incredible.
They tore up a lot of stuff to build those huge monstrous hospital complexes on Tulane. I don’t know a ton about it but I imagine it’s one of the forces driving up housing costs in the surrounding areas – I’m interested in learning more about the history of that neighborhood, if anyone wants to send me some information. I try to identify places that are changing rapidly and support the spots that are staying true to the old neighborhood, and I think Brown Derby 3# is doing a good job of that. It seems like an extremely popular lunch spot for people living and working in the area. 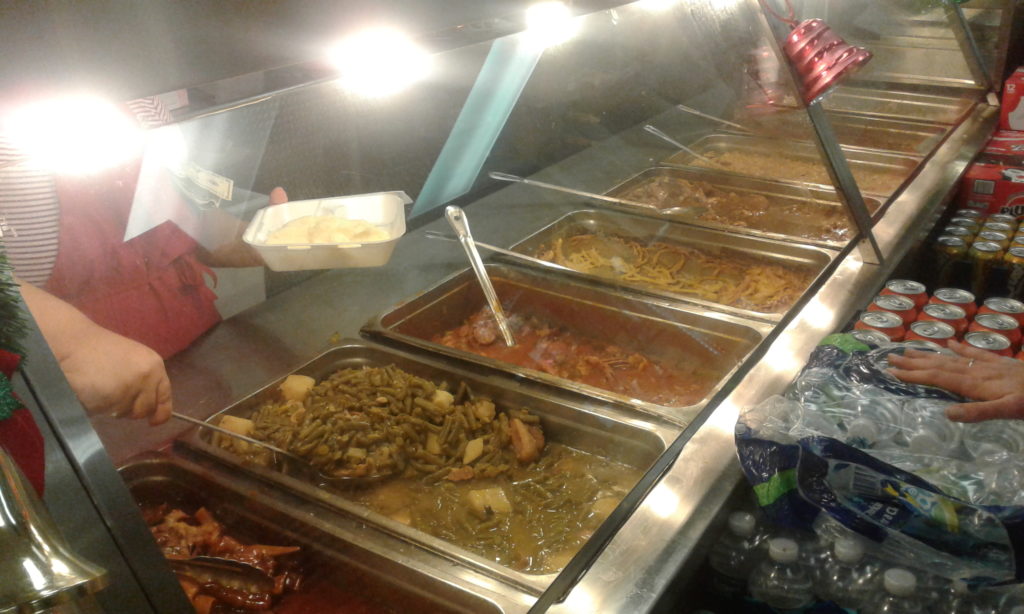 Just some of the Options

They have a ton of options here, and even though I went with two other people, we didn’t get to try them all. I wanna go back to try the turkey necks, mac and cheese, and white beans. I got pork necks, mustard greens, and shrimp with okra. I go to the blue store on Broad and St Bernard and get their shrimp with okra a lot, but this was some next level shit. It had crabs in it, and the crabs actually had meat in them – unlike most of the crabs you get in gumbo at corner stores, where the meat has just melted away as it cooked. The shrimp were nice and firm, none of that weird “frozen too long” texture they sometimes get. The mustard greens were perfect, with thick tender pieces of pork. The pork necks were almost in some kind of gravy. I cook neckbones pretty often and thought I did a pretty good job but these blew mine out of the water. My friends used a lot of napkins eating this meal but I just licked my fingers every few minutes. Everything had some kind of delicious sauce or gravy on it – don’t wear clothes you cant get dirty! 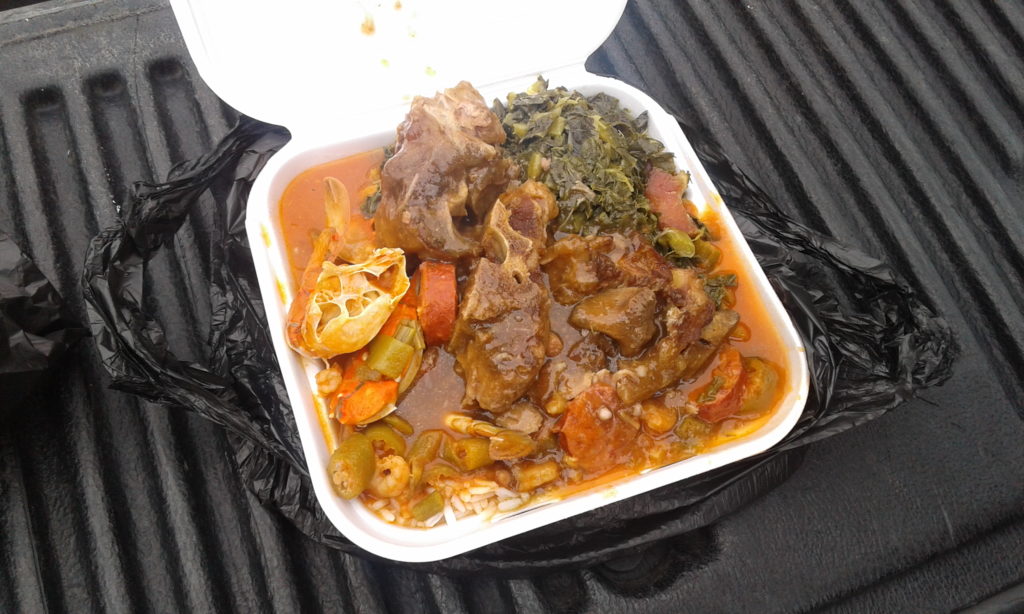 Shrimp and Okra with crab legs

One of my friends got the ribs with mashed potatoes and green beans. The mashed potatoes are out of a box, but not in a disappointing way, and they’ll put gravy on it that they spoon from a tray of salisbury steaks. The sauce on the ribs wasn’t too sweet, which is a complaint I have at some places. The green beans had the same hunks of pork as the mustard greens, and I’d go for the mustard greens over them, though they were still good. My other friend got mustard greens too, but got the stewed chicken with it. 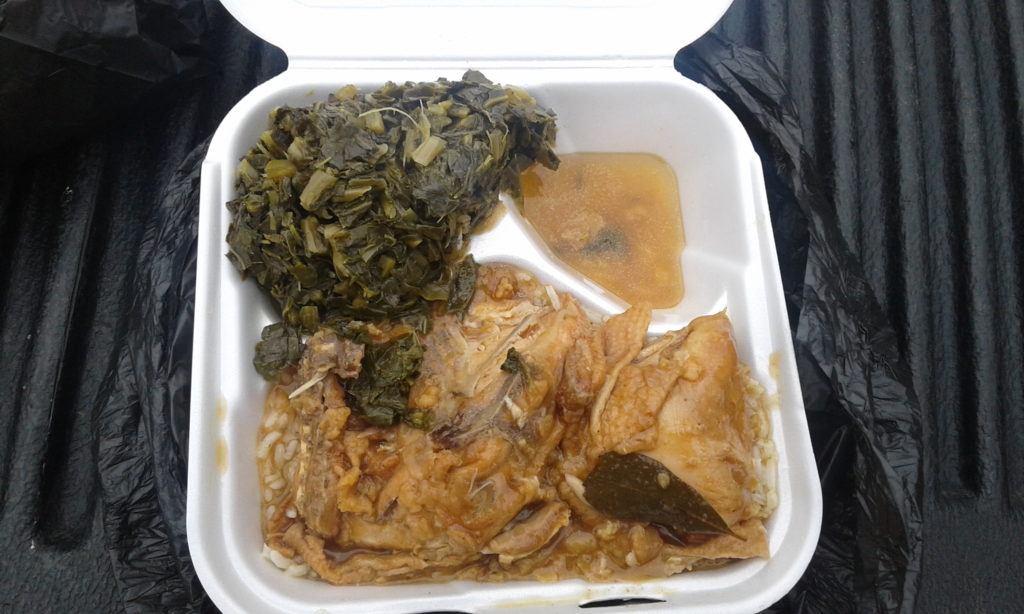 I feel like stewed chicken is often your safest bet at soul food places like this – sometimes it’s a little dry but it almost always tastes good. Brown Derby #3 knocked it out of the park with theirs though. Moist, flavorful, falls apart under your fork. 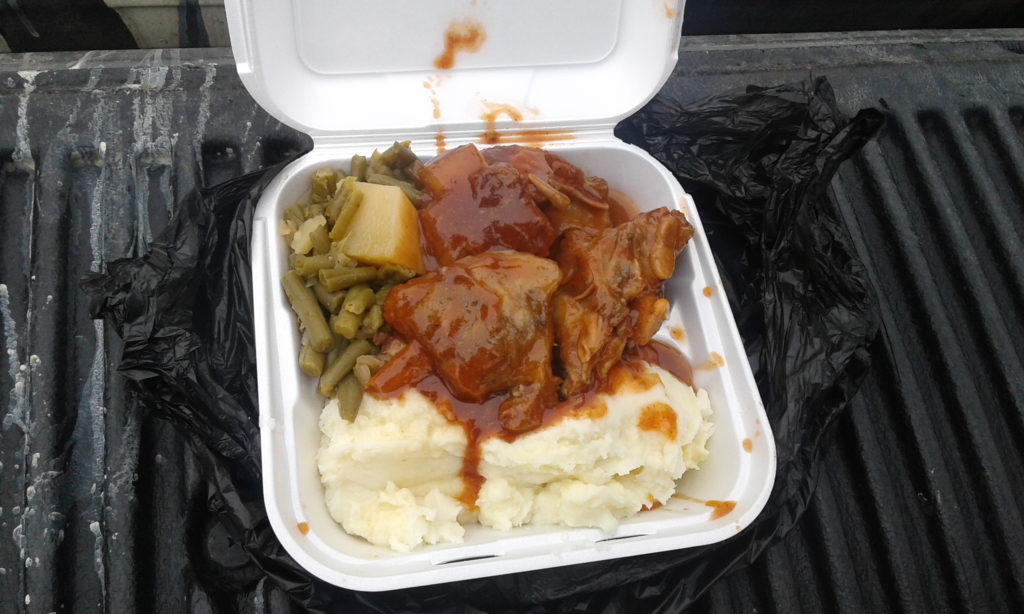 Ribs with Mashed potatoes and gravy

I’ll admit that all of us were really hungry when we went there, so that may have influenced our extreme enthusiasm for this meal, but that doesn’t change the fact that Brown Derby #3 rules. We couldn’t wait to get home and ended up tailgating it in the parking lot. As we feasted we kept saying things along the lines of “oh my God this is so good” out loud. The prices aren’t posted anywhere, but I think most three item plates are $5.99 plus tax. Mine was $8.99, maybe cause of the shrimp with okra? That’s a little on the high-end for this blog, but it was a mountain of food and came with a soda or bottle of water so I think it was still a deal. If you’re going to jail, court, the hospital, or you’re on Tulane Ave for some other reason, check out Brown Derby #3! 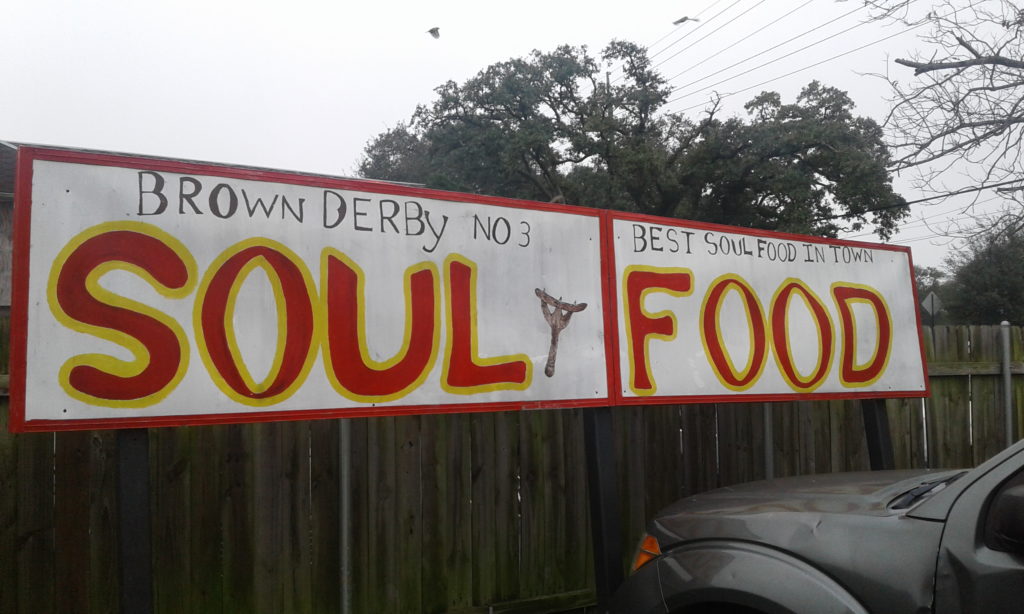