It used to be that the 2 piece fried chicken from Hank’s sustained a whole urban ecosystem of sorts. It was greasy, it was usually good, and it was cheap. Drunk hipsters would wait in line next to habitual hard drug users and women working the street, all ready for Yolanda (who is a gem) to flash her gold toothed smile and serve them some dark meat. Roaches, crows, pigeons, and rats would lurk in the gutters and abandoned buildings of the neighborhood, hoping you’d throw your chicken bones near them. It was desperate and kind of beautiful and it was what kept me going to Hank’s (minus a 6 month boycott when they were too mean to one of my friends). Though they used to be notoriously rude and problematic a bunch of years ago, at this point they’re often really nice to me. But the fried chicken 2 piece costs 1.49 now. The price of my other go-to Hank’s meal, the ham and cheese sandwich (you can get it on food stamps!) doubled over night. One of the crack houses near Hank’s got demolished, and the other one got flipped and renovated. The cool claw-machine that used to be outside the door and would play an old Brazilian song  is long gone. I’m not saying I don’t eat there, but it’s just not the same. 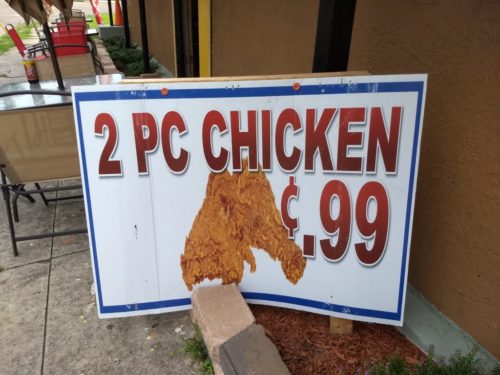 The neighborhood is still changing, but thankfully there’s a new affordable restaurant near Hank’s. They’re not open 24 hours so I think they serve a different demographic, but in my mind they’re a necessary bulwark against the rise in prices of prepared food in this city. Pokey’s Place opened in a strange shaped building on Franklin Avenue that has been empty as long as I’ve lived here. It was their big 99 cent fried chicken sign that attracted me to it, but they were sold out by the time I got there. I’m assuming from the quality of the other food I got that their 2 piece is as good as Hank’s, if not better.

A sweet older couple were waiting for their food when we got there. It was clear they were regulars. We’d just finished scrapping 120 pounds of empty beer cans, which gets you about 46 dollars these days, and we were crazy hungry. We ordered a $5 plate of smothered okra with a smothered porkchop, and the 6 wing plate with a salad and fries. Both came with the standard white slices of Bunny Bread. The smothered okra wasn’t slimy at all, came with white rice, and had both sausage and shrimp in it. It was more of a brown sauce (I’m used to shrimp and okra in a red sauce from the Blue Store), and it was to die for. The smothered porkchop is one of my all time favorite pork chops I’ve ever had. Kayla’s porkchops were better but like I said, they’re gone now. Ray’s on the Ave has a similarly delicious chop, but the fact that this one came with my new favorite okra dish made this plate insanely good. And it was only 5 bucks! 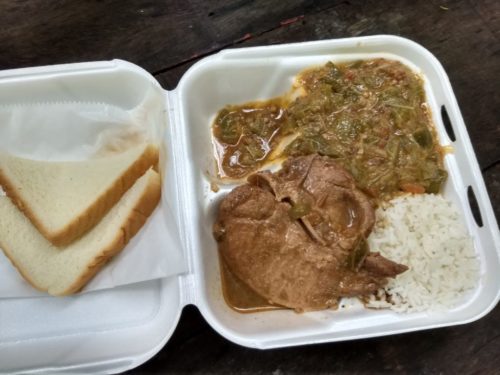 The chicken wing plate didn’t wow me like the okra, but it was solidly good. The breading wasn’t too thick and overpowering, the meat was fully cooked but still juicy. It came with better than average fries (I’m not a big fry guy). The salad it came from was reminiscent of the salad you get with Manchu wings – it tries, but New Orleans just seems to have a different take on salads than I do. Some lettuce, a slice of tomato, and a bunch of ranch is always kinda yummy but it doesn’t really make me feel like I ate something healthy. I wouldn’t tell someone not to get the chicken wings, but I think it’s a bit of a waste when they have so many delicious and affordable other plates.

If it’s 2am and you’re drunk, by all means, go to Hank’s Supermarket and buy some chicken and beer. But if I were you, I’d save my money and go to Pokey’s Place (11am-6pm Monday-Friday) during the day. Just visit Hank’s instagram page if you miss the ambiance of the place, no need to actually step inside during daylight hours. Comment your favorite stories from the wildness that was what Hank’s Supermarket used to be, and let us know what you think of the food at Pokey’s Place! 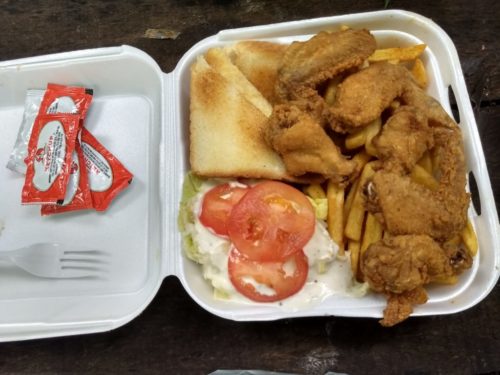