Halloween is just around the corner, and as anyone who lives here knows, it’s time for our neutral grounds, streets, taverns, and parks to be filled with heavily tattooed, filthy, dreadlocked, dog owning, obnoxious, homeless people wearing dark clothes with spikes and patches with band logos often too pointy to read. Many Nola denizens grumble and swear under their breath mouthing the word “Oogles”: a derisive slang with a broad meaning, and like many derisive slang terms with broad meanings, it’s usually applied to the “other”–a group of strangers wearing vaguely similar attire. Everyone that lives here for more then a year grumbles in amazement at their routine arrival on Halloween. It’s like clockwork–every

Oggles will try to be your friend by giving you flowers, this is just a ruse to steal your beer.

October 31st they arrive, they beg for change in the neutral ground, they poop on your front porch, they mistreat their dogs, then their dogs get in fights with your dog, then they punch you in the face and call you a hipster because you don’t dress like them. They spare change, they refuse to work, they spend all their money on fortified wine, they run amok. They don’t appreciate our unique culture. Well, except for the whole drinking in public part. Most importantly, to many who see themselves as part of a great urban renewal process here in the city of New Orleans, these filthy travelers represent a step backwards: not only do they refuse to take part in society, but they are a nightmare for property values and for our image as a progressive tourist friendly city.

But let’s be honest, this is not a new occurrence. In the early 1800s, American frontiersmen and farmers settled in along Mississippi river. They were looking for new markets for their goods. The Mississippi River provided a direct route to the market in New Orleans. These men hired rough boatmen to take their goods to market in New Orleans. These boatmen invaded New Orleans every fall. They drank, they ran amok, they probably weren’t ideal dog owners. The native New Orleanians hated them, they felt they didn’t appreciate their culture, which included fancy balls, opera and the Catholic Church. 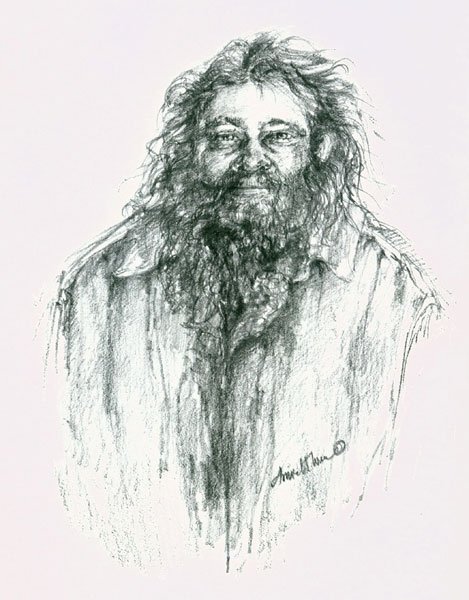 “Mason Of The Woods” Vicious River Boat Pirate. Often hung around Lower Decatur, probably at the 19th century version of the Abbey.

So why do these oogles descend every fall upon our much loved city? Well, unless you’ve had your head up an American Flag for the last 20 years, the opportunities for anyone besides the wealthiest have all but dried up across America, while the price of rent, goods, and services has increased. The opportunities our parents’ generation had are gone. Now put yourself in the shoes of a 15 year old from Muncie, Indiana. Your father’s house is getting foreclosed. He’s drinking himself into a stupor and you can either be making $7.25 an hour at Walmart or go riding trains with your pals. Which one would you choose? Now be honest, open road or drudgery? Some of you might argue that higher education is the solution, that the theoretical 15 year old oogle could just go to college, study a field that they enjoyed, then secure a well paying job; but the reality for most young Americans is that instead of higher education being a gateway into the middle class, it’s just another source of debt, another bill that $7.25 an hour job has to pay. The ability for oogles or anyone below the poverty line to “pull themselves up by their bootstraps” is becoming increasingly impossible.

While we are talking about social realities, I’d like to point out to all you hardcore oogle haters that oogles have not had anything to do with the worst things that have happened to New Orleans. Oogles did not defund the levee system to fund a war in Iraq or bungle the effort to evacuate scores of people from the Superdome. Oogles did not embezzle countless millions of dollars slated to help rebuild the city. Nor did oogles shoot innocent people attempting to cross a bridge then burn their bodies to cover up their wrong doing. Oogles did not refuse to rebuild Charity Hospital and instead opt to demolish the historic Lower Mid-City Neighborhood to make way for a hospital then run out of money nor did they demolish part of the historic Treme neighborhood to make way for a park nobody uses. Oogles didn’t demolish ancient live oaks along Claiborne to build I-10 which lead to the degradation of a historic African American neighborhood. Oogles are not attempting to raise rents in traditionally working class neighborhoods in an effort to make tons of money on real estate. I could keep typing this list, but my point is that the worst things that have been done to New Orleans have been done by corrupt elected officials, many with the “best intentions.” So to be clear, I’m not trying to excuse many of the foolish things oogles do, but a little understanding of the situation can go a long way. Instead of using oogles as scapegoats for New Orleans’ problems, we should examine what those problems are and how we as individuals and our city government fit into them.