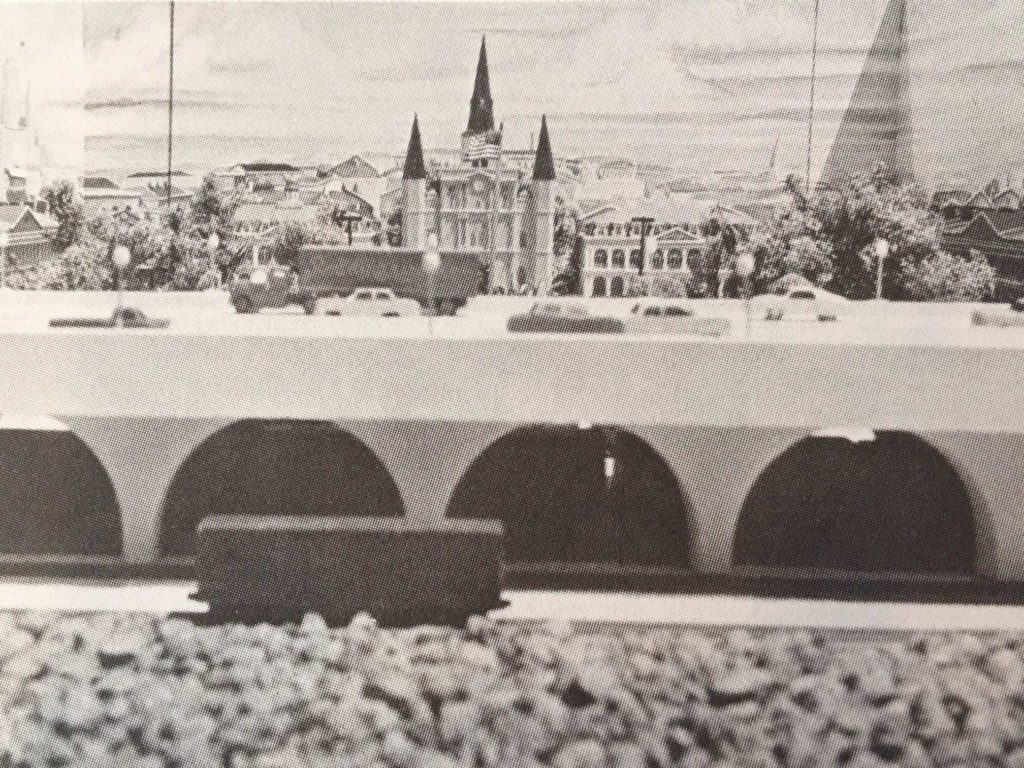 July 2nd, 1969, Fifty years ago today the US was losing a war in Vietnam, yet there was celebration because New Orleans won the Second Battle of New Orleans. The story starts in 1946 when the Department of Highways of Louisiana hired Robert Moses to do an assessment of the city’s traffic patterns and parking. The nation was celebrating the end of WWII and embraced the car as a newfound symbol of freedom. Moses wrote up a detailed plan that included an elevated highway that went along New Orleans riverfront, effectively cutting the the heart of the French Quarter (see the photo above), as well as an elevated highway through the heart of the Treme. Robert Moses was a planner well known for his policies which displaced many inner city’s poor under pretext of blight by demolishing much of those neighborhoods for urban renewal and America’s interstate highway system. Moses’ legacy is riddled with prejudice and racist attitudes, which included him purposely placing bridges in Long Island too low for New York City’s public buses to pass under, effectively keeping the city’s poor from entering the island’s beaches and neighborhoods.

New Orleans itself had tabled Moses’ proposals until other projects were realized, as well as until funding could be acquired. By the early 1960s it looked almost inevitable that the elevated highway would be adopted and a tunnel at the foot of canal was well underway. White flight was in full swing after New Orleans reintegrated its schools and City Planners saw much of the inner city as a slum in need of renewal.

But much had changed since the Moses’ plan was first proposed. The Vieux Carre Commission had largely grown as well as the number of preservationists that were dedicated to preserving New Orleans rich history. Jane Jacobs was getting national attention for her book The Death and Life of Great American Cities in which she blasted Moses and the Idea that Urban Renewal served a city’s poor. In 1966, two Federal Laws, the National Historic Preservation Act and the Department of Transportation Act, passed which focused on preserving the nation’s history by setting stricter rules towards preservation.

On July 2nd, 1969, after years of grassroots organizing and national calls for preserving the ‘Paris of the South’, the plan to build the highway through the French Quarter was defeated.Unfortunately in any battle there are defeats and victories. 1968 had seen the erection of Moses’ proposed six-lane elevated highway go up along Claiborne Avenue. Claiborne avenue was known as the epicenter of New Orleans’ African American community, the birthplace of Jazz, as well as one of the prettiest oak lined avenues in the city, which would fill with second-liners every Sunday.

Other instances of defeats in New Orleans have included Storyville and its unique architectures razed, the filling in of Basin Canal, the destruction of much of the Treme for Armstrong Park, the demolition of a large part of Central City and the Girod St. Cemetery for the stadiums, and the loss of lower Mid City for the Tulane-Unversity Medical complex. Currently residents of New Orleans are now fighting a proposal to expand the Industrial Canal of the 9th Ward, as well as to save The Fly, which nestles up to Audubon Park.Historic preservation, as well as improving urban livelihood, is central to any City’s survival. Years later there are calls to take down the elevated highway that runs along Claiborne Avenue. Here is to finding new ways to give care to ‘The City that Care Forgot’.

Eric Spinrad graduated with honors, receiving a Bachelor in Science, just in time for the market crash of 2008. With a life deferred and job opportunities dismal, Eric hit the open road and eventually washed up on the rich alluvial deposit that cradles New Orleans. Awe inspired by the city’s mostly intact old quarter, which many cities lost to urban redevelopment, he took to books and began sifting through the many layers of New Orleans history. Contrary to history existing within a vacuum, Eric believes that from nature’s test of the levee system to the recent removal of Confederate symbols, New Orleans is in constant motion that continually shapes the city and its inhabitants. Eric is thoroughly excited to join David Hedges at Nola Tour Guy to captivate both visitors and locals alike with the ever changing history of America’s greatest city, New Orleans.