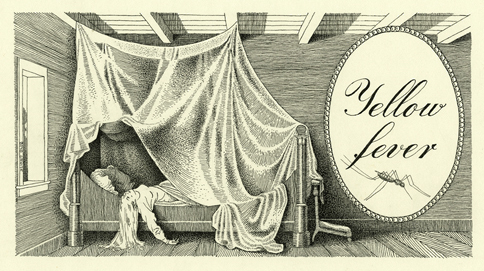 This Halloween season, let us all be grateful that we are not living in New Orleans in August of 1853. In this ill fated year the most deadly yellow fever epidemic in American History ravaged the crescent city. It is said that 1 in 15 people died from Yellow Jack that summer. No New Orleanian was untouched by the epidemic, though the populations that suffered most were immigrants, children, laborers and the poor. Those with means would either leave the city to avoid the epidemic altogether, or remain locked away in the cleanliness of their homes. But even those with access to health care and the most sanitary conditions were not spared the constant threat of death. The city was quiet that August—save the screams of the dying and the occasional cannon blast, shot in an effort to cleanse the bad air from the atmosphere—and reeked of death. 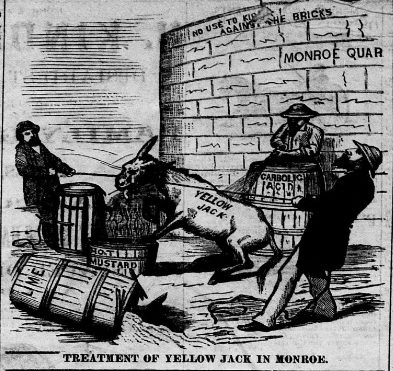 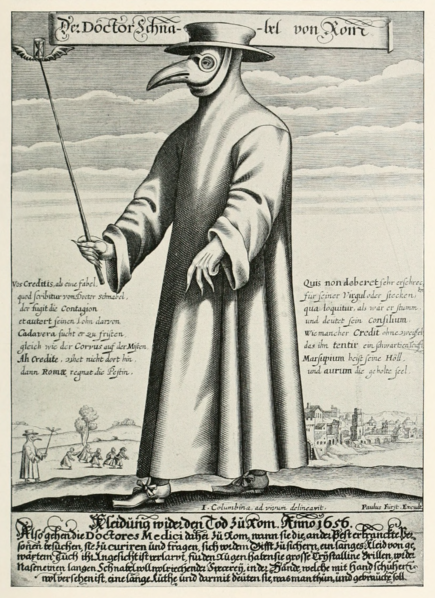 To protect against the "miasma" a plague doctor is pictured here wearing a beaked mask containing aromatic substances.

Prior to 1880 and the discovery of germ theory, no one knew how yellow fever was contracted. So in order to understand the depth of paranoia and distress that gripped the city, we must look at the belief that ruled the day: Miasma theory. Miasma is an ancient greek word that means pollution, and people who feared the miasma dreaded the effects of the bad air or noxious vapor that emanated from rotting organic matter—particularly the bodies of the deceased. It is then no wonder why in 1789 the burial ground in colonial New Orleans was relocated from St. Peter and Burgundy streets, within the city limits, to its current position on St. Louis and Basin streets, which was outside the city at the time. This dreaded smell had a mind all its own, and could crawl up your nose, infect your brain, and render you its next victim.

If you did so happen to contract the disease, your descent into illness came quickly and dramatically. Your skin would turn yellow with jaundice, making you incredibly sensitive to the light of day. Your body would start to shrivel up, making you appear gaunt, and in the case of your shrinking gums, make your teeth appear longer than usual. Finally, and this was often the death knell for victims of the disease, you would cough up blood as a result of your body eating itself from the inside out. When you put the pieces together, it is no wonder than belief in vampires and the undead was so common in colonial New Orleans, and remains to this day. 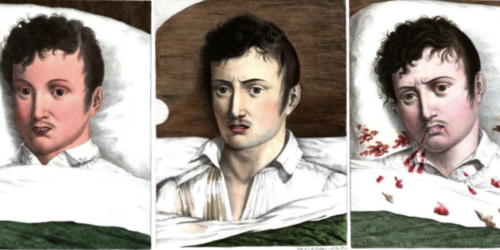 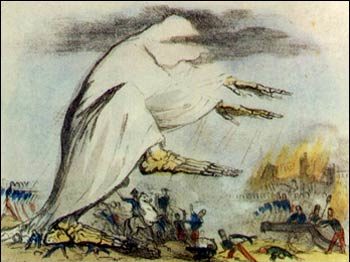 A representation by Robert Seymour of the cholera epidemic of the 19th century depicts the spread of the disease in the form of poisonous air.

Grace Kennedy is a storyteller of all kinds. Reared and educated around Boston, MA, she has been throughly steeped in Revolutionary War and Early Colonial history and worked as a Narrator for Boston Harbor Cruises for four years. After receiving a BFA in Theatre Arts from Boston University, she traded New England for New Orleans and hasn’t looked back. Unlike the rigid and puritanical Massachusetts forefathers, Grace finds the eccentric characters of New Orleans history endlessly fascinating. She is entranced by the duality of New Orleans as a city of sin and salvation, of poverty and wealth, and of disaster and celebration. With the deepest reverence for the city itself, Grace is thrilled to share New Orleans history as part of Nola Tour Guy with theatricality and grace.