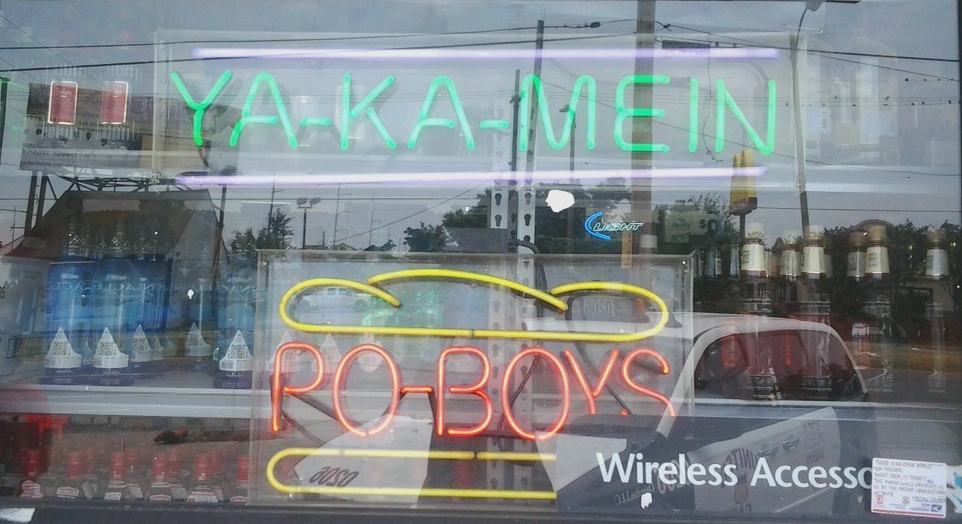 Hangovers are never fun, but it can be especially rough to have one in New Orleans. The terrible sugary drinks they sell to tourists are a recipe for wild misery in the morning, and even the daquiris that locals know and love can make you feel like a squished palmetto bug when combined with the humidity and searing heat of a New Orleans summer.

Luckily, New Orleanians are an incredibly adaptable bunch, and have worked out ways to minimize or cure hangovers. My favourite method is Yakamein. Also called “Old Sober” Yakamein is a New Orleans soup speciality not well known outside the city, a city known for its cuisine. It consists of noodles, beef broth, a hard-boiled egg, meat (usually beef and/or shrimp), and green onions. It is often sold on Sundays at second-lines, which is helpful because if you’re partying right, you probably aren’t feeling your best after Saturday night.

A purveyor of some of the finest Yakamein in town is Ms. Linda Green, also known as The Yakamein Lady. She goes to many of the second-lines, and her soup is definitely worth getting – let her season it for you, and don’t worry about the crazy amount of soy sauce and sriracha she’ll put in, because it’s gonna rule.

Ms. Linda Green believes that Yakamein came from African-American soldiers fighting in the Korean War. These soldiers didn’t get much time off, and when they did, some of them partook of too much soju (Korean vodka) and weren’t in great shape to fight in the morning. The soldiers whipped up batches of Old Sober, took a liking to it, and brought it back with them to America.

My fellow history buffs and I tend to believe Yakamein came from the now-extinct New Orleans Chinatown, and is one of many examples of cultural blending in this diverse port town. Either way, it’s now part of New Orleans cuisine.

If you’re not at a second-line but you’re in need of some Yakamein, where should you go? In the midst of a month long heartbroken bender, I went on a mission to track down the best Yakamein.

The easiest way to find Yakamein is by going into a Chinese restaurant in New Orleans. But you might be making a mistake – Yat Gaw Mein (meaning “one order of noodles” in Chinese, or so I’m told) is clearly the progenitor of Yakamein, but they are very different dishes. I ordered the Yat Gaw Mein at Ming Garden on Broad and was not impressed. The broth was clear and reminiscent of wonton soup. They served it with pork and a little vegetables. It did not help my hangover, or satisfy my craving for Yakamein. Don’t be fooled with Yat Gaw Mein. 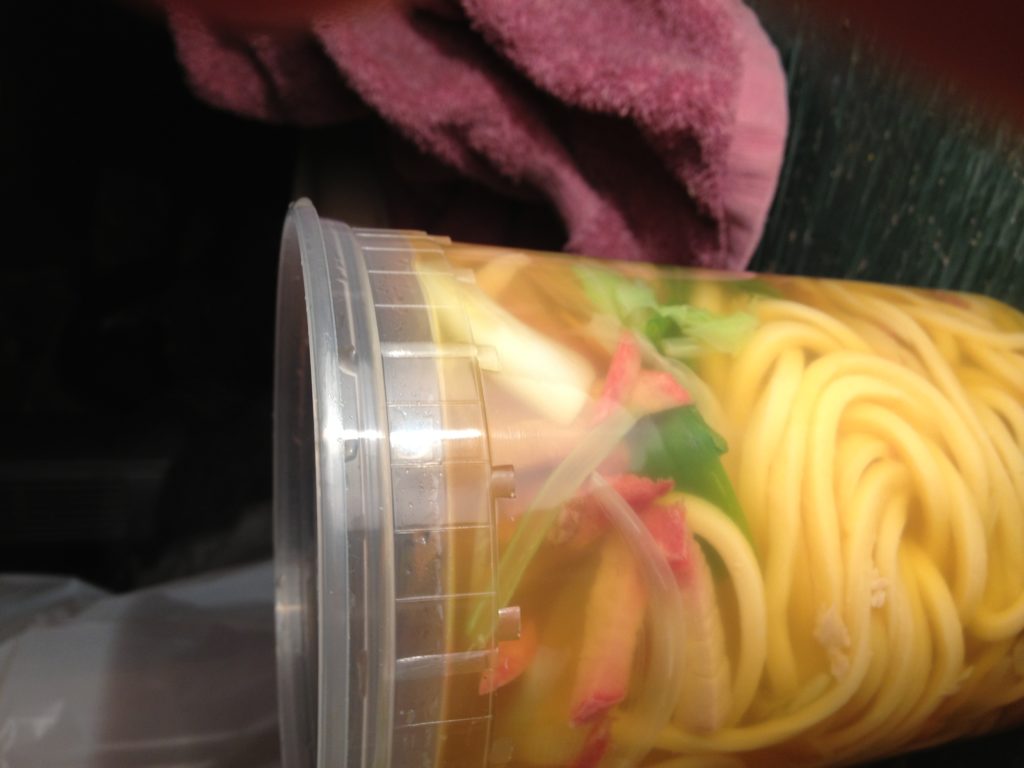 Yakamein with a clear wonton style broth, not real Yakamein.

Captain Sal’s, a Cajun seafood and Chinese food place, also sells Yat Gaw Mein. They called it Yakamein, but I know better. They have the worst noodles I’ve ever had, and the broth is just wonton soup broth. It comes in a big portion with some nice vegetables but, again, it just isn’t Yakamein. I didn’t even bother taking a picture of it.

Right across the street from Captain Sal’s is Gabbys Daquiris. The people who run Gabbys are really nice, their Lights Out Daquiri really lives up to its name, and they have delicious Yakamein. The broth is dark and peppery and the meat is tender. The noodles are thinner than the noodles in any other yakamein, but it works well I think. It’s a little pricey, but if you’ve got a bad hangover, go for it.

If you head towards the lower ninth ward, down St. Claude from Gabbys, you’ll see a place on the right just before the bridge called True Cajun Seafood. My friends and I just called it the bridge store. It’s run by a really nice Vietnamese guy and his moody wife. They serve great Yakamein. The noodles are much thicker than at Gabby’s, and the broth isn’t as dark, but it really hits the spot. The only thing is that they use the kind of beef you find on cheese-steak poboys – I kind of like it, but some people might not be into it.

The final Yakamein worth mentioning is from Man Chu, on Broad. I read somewhere on the internet that they had the best Yakamein in town so I went to check it out. My friend and I got some and took it to city park to enjoy. It was indeed stellar. 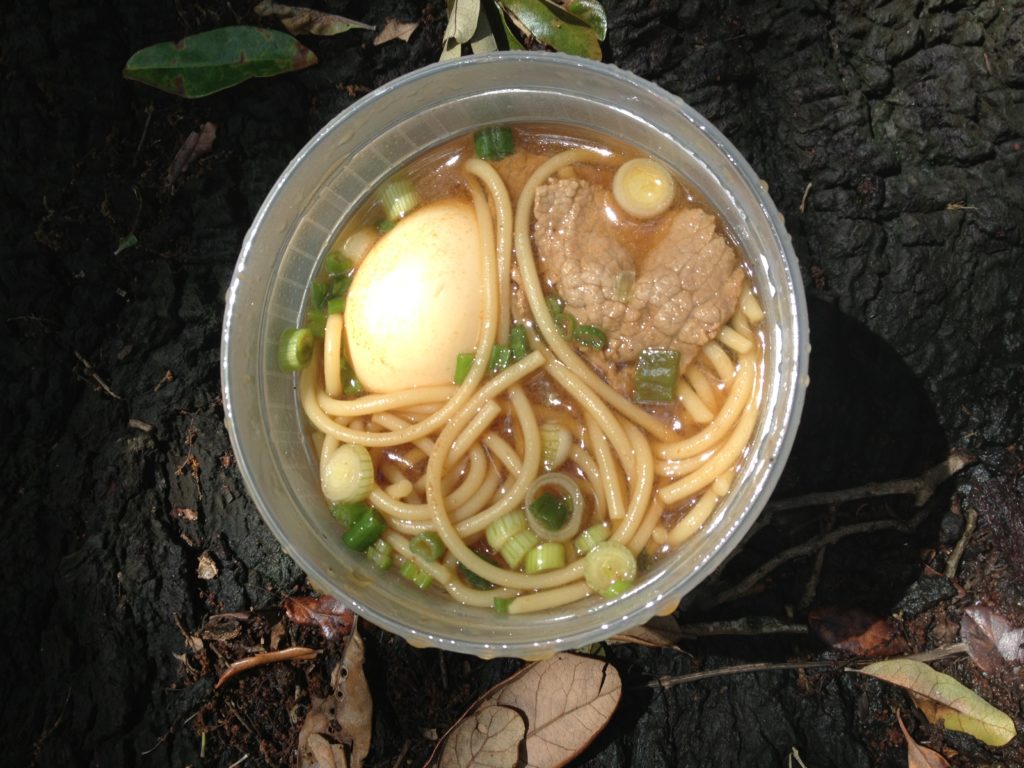 This is everything that Yakamein should be. Man Chu on Broad comes highly recommended, though I don’t agree with the blogger that claimed it was the best in the city.

I am writing this at the intersection of Claiborne and Franklin, and noticed that China Inn, a strangely painted hole in the wall Chinese food restaurant, was selling Yakamein. 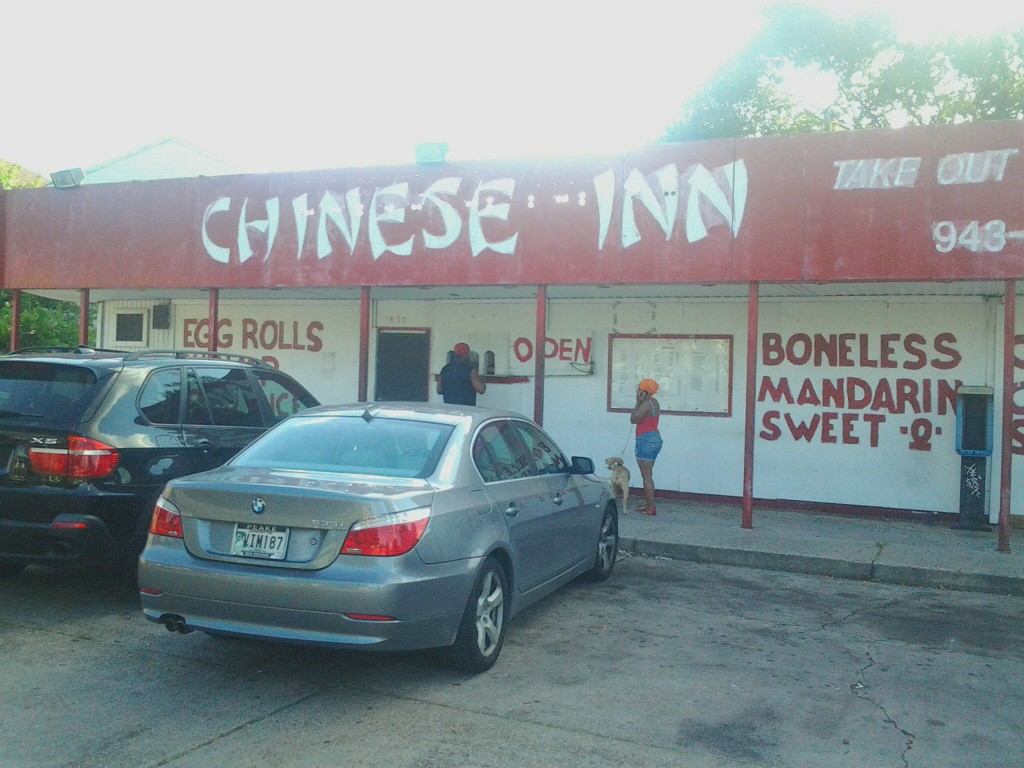 Classic hand-painted signs let you know what they sell.

I got the beef and it was everything that Yat Gaw Mein is not – salty dark broth, great noodles, and decent cuts of beef. It was also really cheap, so I think it’s worth getting.

I took this picture of the China Inn Yakamein to show you how much soy sauce you need to put into all servings of Yakamein.

Got any reviews of other Yakamein places? Let me know at cicada.orgy@gmail.com Next time you’re hungover, maybe I’ll see you at the bridge store, and we can share a moment as we both slurp down a serving of Old Sober.