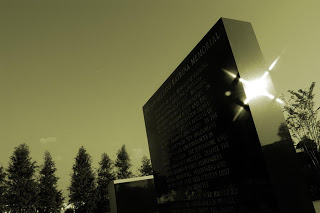 Hurricane Katrina is still present in every aspect of New Orleans life. It is as much a part of our culture and community here as our speech, our streetcars, and our music. It is as defining an event as the Civil War, Emancipation or Brown Vs. Board of Education, or more so, as everyone here experienced it. If you want to start up a conversation with anyone in New Orleans, you simply start by asking “Were you here for Katrina?”

Often I don’t even say the name. It has too much emotional impact. I say “The Storm.” My friends down here who are named that name have come to spell it with a C, Catrina; one friend goes by Karina. Some just go by Kat.

Just days before I left New Orleans to go on tour in May, Lauren and I were at a favorite cafe/head shop/botanical on Canal Street. The cafe portion borders Saint Patrick Cemetery, and as we had some time to kill, we decided to walk through the cemetery, which occupies sites on either side of Canal Street. When we crossed Canal, we found something new to either of us: the New Orleans Katrina Memorial, a tiny area wedged along the side of Saint Patrick. At the time, armed with only my phone’s camera, I took a few shots, unworthy of posting, and swore to come back after my tour and do a proper blog post on this very creepy, very beautiful shrine. 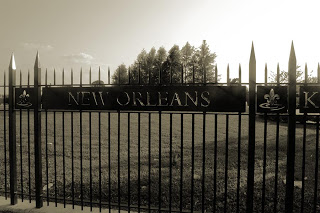 Like many things Katrina, the shrine itself was built around emotional outpouring and heated controversy: while the mayor’s office allotted a million dollars for the shrine to be built, and $200,000 more came from private donations, as the third anniversary of the storm approached there was still no memorial, and 85 unidentified bodies were still unburied. But weeks before the 2008 anniversary, heaven and earth were moved, permits were pulled, and the memorial was built. On the third anniversary of Katrina, August 29, 2008, a jazz funeral procession marched along Canal Street; amidst weeping and a few sighs of resolution, the final seven unidentified victims of Katrina were carried to the memorial and interred. 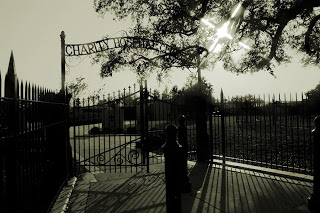 The Katrina Memorial sits on a plot once used to bury the poor and indigent by Charity Hospital, and the gates of the memorial still carry Charity’s name above them. To the side of the gate is the current name, New Orleans Katrina Memorial. As one enters, a small reminder of Charity sits off to the side: a stone commemorating those who donated their bodies to scientific research after their death. 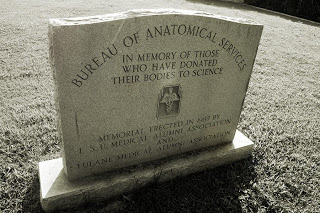 On August 29, 2005, Hurricane Katrina made landfall upon the Louisiana and Mississippi Gulf coast, bringing devastation to many communities. In New Orleans, storm surge and the failure of the levee system caused flooding in over eighty percent of the city, trapping thousands. In the chaotic aftermath New Orleanians faced desperate circumstances in homes, hospitals, the Superdome and other makeshift shelters. Despite the heroic efforts of first responders, medical personnel, volunteers and the military, over 1,100 citizens lost their lives in the disaster. 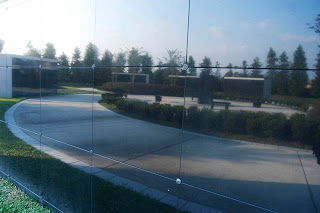 Most of the deceased were identified and buried by loved ones in private ceremonies throughout the nation. Here lie the remaining. The unclaimed and unidentified victims of the storm from the New Orleans area. Some have been forgotten. Some remain unknown. 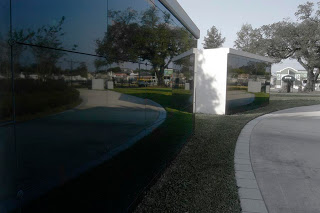 This memorial is dedicated to these individuals and to all who suffered or died during Hurricane Katrina. Let the victims here forever remind us of those harrowing days and the long struggle to rebuild our city. Let their final resting place call us to constant preparedness. Let their souls join into an eternal chorus, singing with the full might of the indomitable spirit of New Orleans. 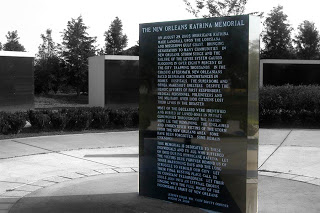 Around the marker sit stone benches, and beyond these, forming the outer spiral of the storm, are five crypts, the final resting places of the bodies of eighty-five victims of Katrina.

The place is still, peaceful, as if the souls of those victims, unidentified for three years and finally mourned and interred with a jazz music second line, are finally at rest. As I sat on a bench around the marker, preparing my camera equipment, a bird sat in the huge oak tree above the gates, singing to me. It sang for minutes, a constant song rising above the sounds of traffic or the street car beyond the memorial gates on Canal. “Let their souls join into an eternal chorus…” Perhaps they have done just that. 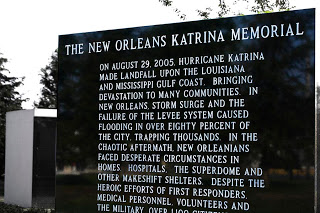 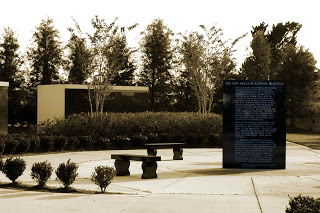