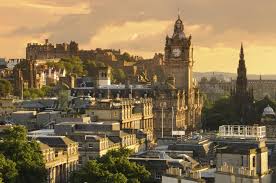 There’s no better way to discover the Athens of the North than by taking a walking tour around the city’s best loved sites. Read on to find out where to begin your Edinburgh adventure.

Edinburgh is widely considered one of the most beautiful cities in the world, and there is no better way to take in its sights and sounds by hitting the streets and exploring on foot. Luckily, the Scottish capital is a compact city, and the history and legends that abound in the city can be soaked in during a ramble through its winding streets, ancient alleyways and hidden nooks and crannies. Read on to find out where to start on your walking tour of Edinburgh…

A number of walking tours are available in Edinburgh, but why pay for something you can get for free? Free walking tours are available in the city centre, leaving from the Tron Kirk and various other locations throughout the Old and New Towns. Alternatively, take yourself around some of the best-loved sights in the Scottish Capital and get your bearings over a few beers in some local establishments.

The Old Town of Edinburgh is the most famous and touristy part of the city, and for good reason – the imposing Edinburgh Castle sits at the head of the Royal Mile atop a huge volcanic rock, setting the scene for a plethora of heritage attractions in its shadow. After taking in the views from Castle Rock, head down the Royal Mile towards Holyrood House, the Queen’s residence in Scotland, and see the majestic palace.

Whilst in Holyrood Park, if you’re feeling energetic, try the climb up the iconic Arthurs Seat. It’s a relatively short but steep climb, but worth it for the views of the city, which are second to none.

From the park, head back up the Canongate towards the Cowgate and Grassmarket. This area is steeped in stories about the nice, naughty and nasty figures from Edinburgh’s history, and any number of local bar workers will be happy to tell you all about their resident ghosts.

Once you’ve spent a day strolling, eating and drinking your way around the Old Town of Edinburgh there are plenty of great central Edinburgh hotels and cheap (by Edinburgh standards) but quality restaurants to relax and rejuvenate in. Make sure you get a good night’s sleep – the Old Town’s only the start of it!

What are your favourite walking routes in the Scottish capital?

Chris Mustaine is a travel writer and designer who loves exploring all the world’s nooks and crannies. When he’s not off somewhere away from his home in Edinburgh he’s indulging his passion for sharing what he’s seen and done across the web.