You come to visit New Orleans and you wanna drink like the locals do, so you’re on the look out for a bar with some quirky wall art by Dr. Bob. First thing’s first: locals drink steady and regularly. We drink to celebrate, we drink to forget, we drink because we just got off work, we drink because we are about to go to work and we drink because it’s fun. If we did all our drinking in the bar we’d quickly go broke and if you haven’t noticed, most locals are broke or in the process of going broke. But when God made New Orleans He gave us open container laws. It was His way of showing us how much He loved us for being good Catholics. 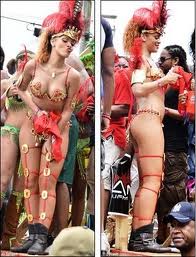 If you’re gonna drink on the street you need to purchase said drink. Sure, bars have to-go drinks but hell, doesn’t that defeat the purpose? So which stores? CVS and Walgreens are attempting to replace the Marginy with a parking lot so let’s avoid those.

Well, if it’s before 6pm check out Joe’s Wine Cellar on Dauphine. It’s a little shop; Joe, the owner, is the only person who works there and like a lot of locals, he keeps his own hours. He has a great selection and is extremely knowledgeable.

A cheap but less classy choice is Unique on Royal Street. Unique is popular with restaurant workers getting off their shifts (or getting on their shifts) and features the standard number of crazy people milling about. Domestic tall cans are one dollar. Can’t be beat.

Then there’s Sydney’s on Decatur Street. It features a wide selection of fancy beer and sassy clerks.  Many of these fine establishments will sell you a cup of ice, a great option for some sidewalk cocktails. 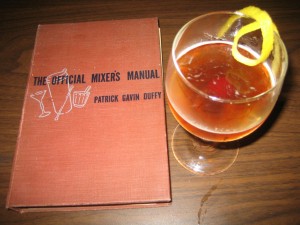 So where to take your cold beverage? Which of these streets should I walk? Why is that guy staring at me? What’s the deal with all these weird smells?

1. Royal Street. I’m gonna assume that you’ve gotten a good early start to your drinking, and it’s roughly 1 pm. Well, mosey on down to Royal Street and watch some local musicians strum away for tips. Remember: they don’t make a salary besides what you tip them so be generous with all that money you’ve saved. 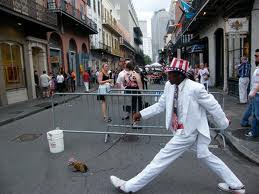 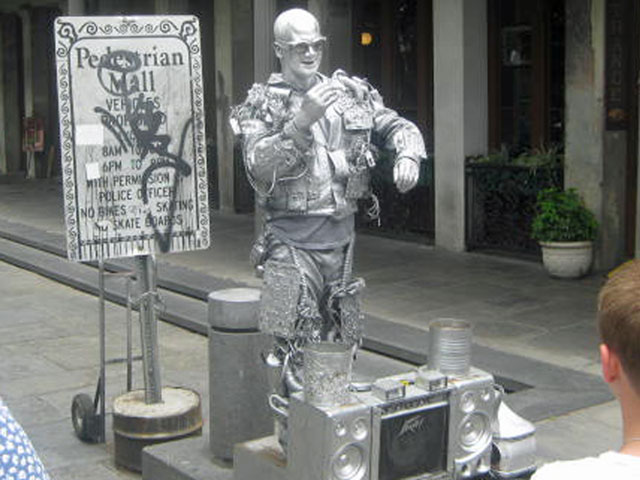 The French Quarter features ample breeding ground and a healthy habitat for men who paint themselves silver.

3. The Riverwalk. Catch a cool breeze off the muddy Mississippi. We wouldn’t have a city if it wasn’t for her, so knock one back and watch the river traffic cruise on by.

4. Ferry. On the foot of Canal you can catch the Algiers Ferry. It’s free for pedestrians and great for photo opportunities. Once John Goodman killed himself by jumping off it and another time it was blown up in a terrorist plot. Both those things happened in movies so it’s easy to get the two confused. Not a whole lot to see in Algiers so stay on the ferry. Ok, it did feature the first slave market in the history of New Orleans and William S. Burroughs had a house there but let’s focus on drinking.

6. Bourbon Street. Ok, Ok, so you should at least stroll down Bourbon Street once in your life. Look at all the people so you can see some of the worst humanity has to offer in the form of vomit, piss, and plastic crap with Fleur-de-lis on it. 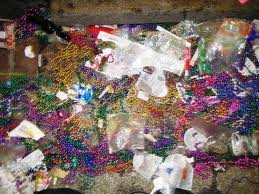 7. Verti Marti. By this time, you’re probably fairly buzzed and hungry from all that walking. Stop in at Verti Marte. They have some great po-boy options. In case you haven’t tried a po-boy, they are giant sandwiches originally invented to feed striking street car workers. The roast beef is pretty good and they have some fairly crazy options for the adventurous food tourist. They don’t have any seating besides the curb across the street but this gives you a great place to eat while you watch the carriage drivers stop and tell the story of the LaLaurie Mansion. They might also mention that it was once owned by the very frightening actor Nicolas Cage who is best know for his role as a cop who yells at children in the film The Wickerman. He lost the house because he forgot to pay taxes on it.

8. Decatur Street. The highlight is the marimba player on the corner of Ursulines and Decatur playing for whoever strolls by. Decatur used to be the heart of the Redlight District in the early 19th century before Storyville and it still has that filthy, seedy essence despite, or maybe because of, Margaritaville. Also check out Molly’s on the Market and its abusive drug addled twin The Abbey.

9. Frenchman. Ok, it’s not in the French Quarter, but just follow Decatur and you will find some of the best nighttime people watching the city has to offer. Jazz clubs, street musicians, sidewalk art sales, 13, and at the end of that walk, stop at the greatest terrible bar in the city: The John.

10. I would like to use this time to mention the best corner store po-boy the city of New Orleans has to offer. It is the Shrimp Po-Boy at Rampart Food Store.  It’s so good it even got mentioned in the NY Times. Once, a pal of mine got terrible food poisoning from it, spent 4 days on a toilet, but often goes back for another. That goes to show you the love a man has for a good sandwich is total and complete.

That’s it.  Go out there and do some street drinking!